The Secret of Suffering Well

I first saw suffering (I mean real suffering) when I was 12 years old. My 16-year-old sister began losing weight and feeling bad and after a myriad of tests, we learned she had Hodgkin’s Lymphoma. In the late 1960s, treatment options were limited, largely ineffective and quite brutal. After an agonizing two-year battle, her suffering ceased, but our family’s nightmare of life without this beautiful girl was just beginning. For the first (but not last) time in my life I asked, “Why would God let this happen?”

Maybe you’ve asked that same question when suffering has hit home. Nearly 50 years later, I still don’t have this “why do bad things happen to good people thing” figured out, but I have come to recognize five facts about suffering that God wants me and you to know.

Most of us are just fine when we hear about bad things happening to bad people. If a crook robs a bank but slips on a banana peel and breaks his leg as he makes his getaway, we call it karma or justice and think he or she got what they deserved. But when bad stuff happens to “good people” (namely ourselves or those we love), we often point fingers at God. That’s unfortunate because despite what some televangelists might tell you, God doesn’t give His kids (even His star students) a detour around rough roads. In John 16:33, Jesus told His top teammates “…you will have tribulation” and in Matthew 5:45 He reminds us “…for He…sends rain on the righteous and the unrighteous.” So, the first step to handling hardship is to realize you’re not exempt—so anticipate its inevitability. But there’s another thing those who follow Jesus need to know.

While we all experience suffering, some of us will suffer more or differently than others. Job was the godliest guy in town but got hit harder than his less devout friends. As Paul switched from opponent of Christ to proponent of Christ, his seasons of suffering became more frequent and more intense than others who followed Jesus (2 Corinthians 11:23-28).When we acknowledge that the pain and painful experiences of others are real but different than our own, we can show and grow compassion and overcome the temptation to view suffering as a competition.

This year’s wet winter caused our Arizona desert to bloom more than it has at any time in the last 30 years. As beautiful as those yellow wildflowers were, they wreaked havoc on those of us who have allergies. But once June brought its 112-degree temperatures, the flowers died and our heads cleared. When it comes to allergies, suffering is seasonal. While it may not seem like it, the Bible promises that all suffering is seasonal. In other words, no matter what hardship you are experiencing, there will come a time when it will go away. Psalm 30:5 says “Weeping may endure for a night, but joy comes in the morning;”and 1 Peter 5:10 says “…the God of all grace, who called you to His eternal glory in Christ, after you have suffered a little while, will Himself restore you and make you strong, firm and steadfast.”

When writing about suffering, the famous atheist/philosopher Nietzsche once said, “that which doesn’t kill me makes me stronger.” He was partially right! He should’ve said “that which doesn’t kill me makes me stronger if I handle it like Jesus did.”  Suffering when handled like Jesus can be incredibly constructive. The book of James (1:2-4) tells us that Christ-like suffering builds endurance and maturity. The book of Romans (3:3-5) adds that suffering rightly handled also builds character and hope. But both the Bible and experience remind us that suffering handled the wrong way is usually more destructive than constructive and can make us bitter not better. So what’s a good way to handle suffering the right way? That brings us to the fifth and most important secret of suffering well.

About 10 years ago, I stood with grieving parents by the grave of their 15-year-old daughter who had taken her life. As I read the 23rd Psalm to these broken friends, a thought hit me as I read “yea though I walk through the valley of the shadow of death, I will fear no evil for Thou art with me.” The phrase that I had somehow missed the first 5,000 times I’d read it was “…for Thou art with me.” The epiphany was that with most suffering, I don’t get to vote whether I want to experience that valley. If I did, as a world-class chicken I’d vote not just “no” but “heck no!” What Psalm 23:4 does tell us is that while we usually don’t get to vote on our valleys, we do get to vote on whether we will walk through them with our Good Shepherd or without Him. As a pastor who’s endured a few seasons of suffering myself and who’s stood beside many of you who’ve suffered far more than I have, I can promise you this… “ when it comes to a valley, it’s better to walk through them with Jesus than without Him.”

Successful suffering doesn’t just require the person of Christ, it requires the crew of Christ! Translation? When the road gets rough, quit trying to go it alone! As Jesus suffered in the garden of Gethsemane, He reached out to three friends and asked them to keep watch with Him. If Jesus needed compassionate comrades, so do I. Paul calls us to weep with those who weep (Romans 12:15) and to bear each other’s burdens (Galatians 6:2). By the time Solomon (who is regarded as the wisest man other than Jesus to have walked the planet) got his AARP card, he concluded that two and even three were better than one during those tough times when you stumble, feel cold or are attacked (Ecclesiastes 4:9-12).

So, if you or someone you care about is going through a season of suffering remember these 5 commandments: 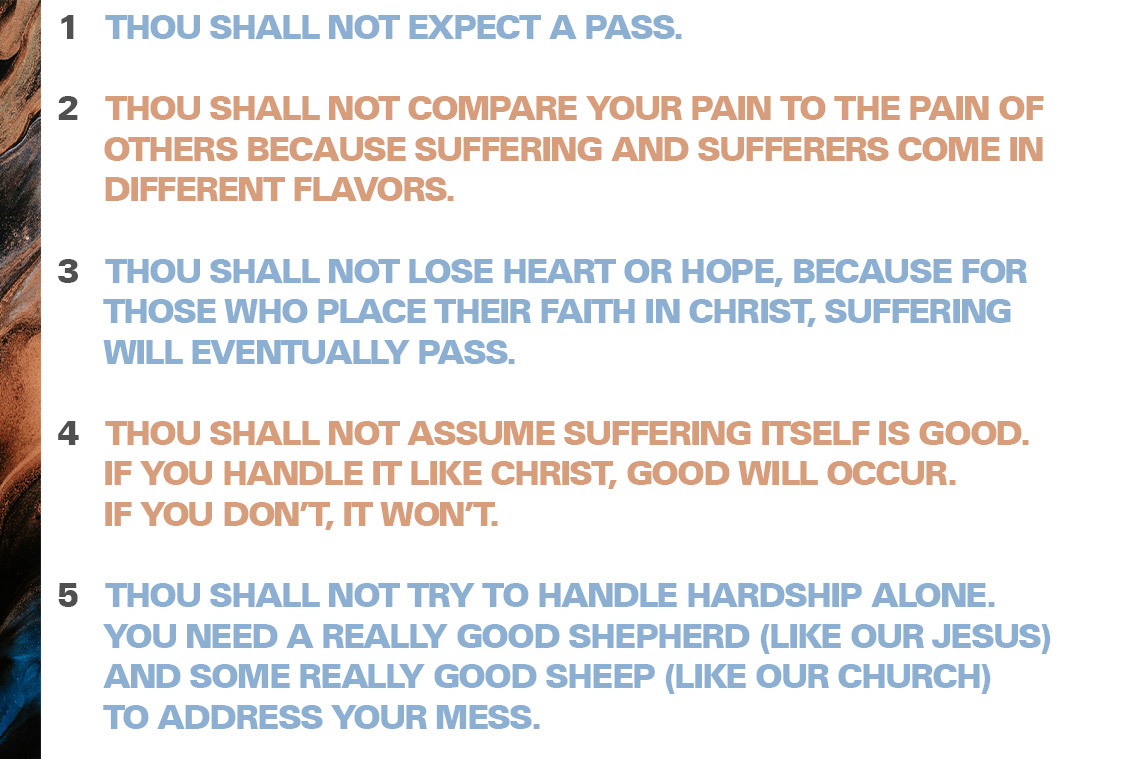 If you need someone to listen or walk through suffering with you, we have a team of trained Stephen Ministers who are ready and available to talk with you. Email counseling@scottsdalebible.com or call 480.824.7239 to learn more.