Recently, my wife and I were in Virginia for vacation. We both love American history and decided to make a trip to see Monticello, the home of Thomas Jefferson, America’s third president and author of the Declaration of Independence. On the morning of our visit, the weather forecast predicted a high probability of thunderstorms, but we decided to go for it. While it was a bit overcast, the storm never came. As a result, we practically had the whole place to ourselves and had somewhat of a private and leisurely tour.

Because Jefferson was an architect, much of his personality is seen in the home and grounds. The beautiful 11,000 sf. building is featured on the back of the U.S. nickel. As we completed the tour and were checking out the gift shop on our way out, I chose a book to read on the four-hour flight back to Phoenix. The book is entitled Saving Monticello: The Epic Quest to Rescue the House that Jefferson Built by Marc Leepson.

When Jefferson passed away on July 4, 1826, his mountaintop home was already in the early stages of physical decay. His eldest daughter was named the executor of Jefferson’s estate and found the upkeep to be something she simply could not maintain. She ended up downsizing by relocating the family to another nearby home that was more manageable. Monticello was somewhat abandoned, and time continued to pass. 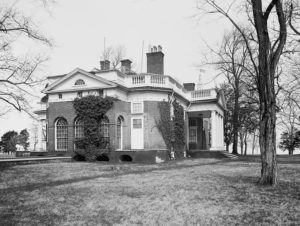 Four decades after Jefferson’s death, Monticello, his idyllic custom-built home, had begun to look like a haunted house. Jefferson’s granddaughter, Virginia Trist said, “It will grieve you both very much to hear of the depredations that have been made at Monticello.” She reported how some people had, without permission, availed themselves to some of the fruit trees, going so far as to even dig some trees up by the roots to replant. Perhaps they wanted to be able to tell people that they had Jefferson’s apple trees. Another visitor said, “The house is much dilapidated with age and neglect.”

Four decades after Jefferson’s death, Monticello, his idyllic custom-built home, had begun to look like a haunted house.

However, just in time, Uriah Levy purchased the third president’s home and began to restore it to its former glory. He did this not because he saw the value in preserving the home for historical reasons, but more so because he simply loved Thomas Jefferson. Without his love and resources, more than likely, Monticello would’ve simply fallen through the cracks of history and time.

Sin has caused all of God’s creation to become somewhat dilapidated. Sin vandalizes everything. Like Jefferson’s daughter, on our own, we simply cannot overcome the debt and spiritual recession. We cannot maintain ourselves on our own. However, the death, burial, and bodily resurrection of Jesus defeated the curse of sin for humanity that has caused all of creation, including us, to look like a haunted house in comparison to His original design for us.

Jesus is a contractor who is restoring everything to how it should be. In fact, God is just getting started. At some point, His goodness will even reverse the curse upon all of His creation, including the animal kingdom.

Jesus is a contractor who is restoring everything to how it should be. In fact, God is just getting started.

The day is coming when there will be no more pain and suffering for all His creation. No more floods, disease, or death! This relief is not only for human beings, but also for the “whole creation” that now groans in suffering and is awaiting the restoration that will come sooner than later.

Jesus sees the value in you and will not only redeem you (pay the price for your sin: John 3:16), but will restore you to your true calling and purpose. Jesus not only desires to provide a custom-built home for you (John 14:2); He alone has the credentials and most importantly the love to do so (John 14:6).