If we claim to be without sin, we deceive ourselves and the truth is not in us. If we confess our sins, He is faithful and just and will forgive us our sins and purify us from all unrighteousness. (1 John 1:8-9)

My first week as a Chevy salesman wasn’t promising. As I took the long walk in my dress pants, unworn shoes, and the standard white button-up and tie to the employee lot, I racked my brain for even an ounce of good news to bring home to my new bride. One hundred dollars a week wasn’t going to pay the rent on our new apartment, let alone groceries. 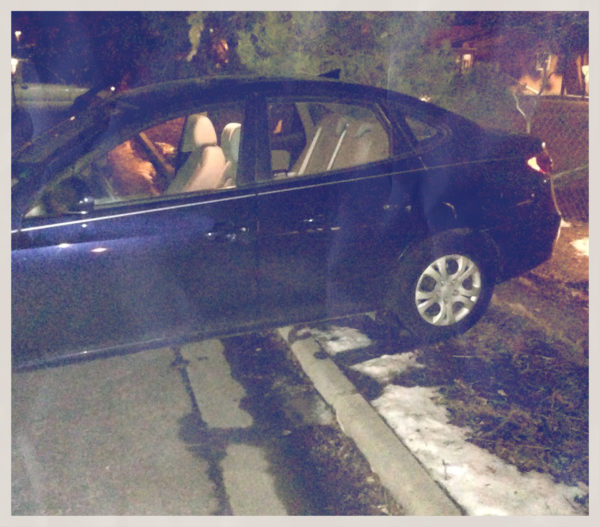 As I approached my blue manual transmission Hyundai Elantra sedan, I thought the good news had come. My car, which I had backed in against the curb, was pushed back five feet over the median with only my front tires touching asphalt.

The only conclusion that made sense in my mind at the time was that the other salesmen loved me! They had decided to haze me by picking up my vehicle and moving it over the curb. A purely practical joke, I had joined a fraternity of salesman.

But then I realized something was off. No one popped out of their hiding spot. No one yelled or laughed at my bewildered expression. In fact, I was alone in the unlit lot and upon closer inspection my front fender was badly damaged and my rear one was pressed against a sapling aspen.

No one popped out of their hiding spot. No one yelled or laughed at my bewildered expression.

Scratching my head, I turned back towards the dealership and I saw a figure waddling my direction past lines of new cars. Less than average height, pudgy enough to make the buttons on his dress shirt pull, and with a slicked-back white mullet, Benji was the epitome of a used car salesman. Well into his 60s but with a surprising bounce in his step he yelled, “There you are! I’ve been looking all over for you!”

I began to deduce that his concern for my whereabouts and the new location of my vehicle were related. He continued almost out of breath, “You are never going to believe what happened! I was trying to move the receptionist’s car so she didn’t have to walk all the way out here in the dark, and I couldn’t seem to get the thing out of park! After I looked everywhere my only choice was to hop out and look on the floor. I finally found it, pulled the emergency brake, and it rolled back into your car. I’m so sorry!”

It took me a second to put together his story. Another person’s car rolled backward into mine in a flat parking lot, without a driver and with enough force to push my car a significant distance over the curb? Things weren’t adding up, but I could tell he felt bad.

Things weren’t adding up, but I could tell he felt bad.

It wasn’t long before my new manager and several other employees came out to see what had happened. He recounted his version of the accident to the newly formed crowd, but they didn’t seem to be buying it at all.  You see, being the new guy, I didn’t know what they knew about Benji. Benji had a reputation for creating elaborate and outlandish stories to cover up his mistakes, more specifically, his drinking.

Periodically something like this would happen, and everyone would play along with Benji’s story, all the while knowing the truth of his lies and problem. It was obvious to everyone what had happened to my car, and the only person Benji was deceiving with his story was himself.

A story like Benji’s is so preposterous that we can find ourselves pitying him. We can even think we are better than him. But we have to realize that we ARE him. We live our lives like a Pharisee comparing our sin to the worst of the worst, and not obtaining the heart of the repentant tax collector who so famously cried out, “Be merciful to me, a sinner.”

We live in denial of our sin. We try to hide it, conceal it, minimize it, blame it on others, excuse it or just forget about it. All this in a pathetic attempt to protect ourselves from the clearly stated truth that we will continue to sin in some measure this side of heaven. John says if we say we are without sin we are deceiving ourselves and the truth is not in us. Adam deceived himself when he blamed Eve and God for his failure as a leader in the garden. Aaron deceived himself when he recalled the “miracle” of the golden calf’s making to Moses. We deceive ourselves when we fail to confront sin in our lives that is clear as day to others.

We live in denial of our sin. We try to hide it, conceal it, minimize it, blame it on others, excuse it or just forget about it.

The true litmus test to determine your own understanding and depth of belief in the gospel is simple—how often do you confess your sin to God and others? As Christians, we need to bravely step out of the shadows of our sin and into the light of the forgiveness God offers those who freely confess their shortcomings. Afterall, “God demonstrated His love for us in this, while we were still sinners, Christ died for us” (Romans 5:8).

There was no shame when you were adopted into the family of God, in spite of your sin, and there continues to be mercy and grace for those who walk in the freedom of living out their acceptance through the blood of Christ. Fellowship with God is a result of our salvation, and confession allows us to continue in it. Repentance and faith are not merely a slogan or catch phrase, but how we are to live our lives.

My challenge to you then is this: confess your sins to God and others. Experience the grace and forgiveness of the gospel anew each day. Walk in the truth that “If we confess our sins, He is faithful and just and will forgive us our sins and purify us from all unrighteousness” (1 John 1:9).